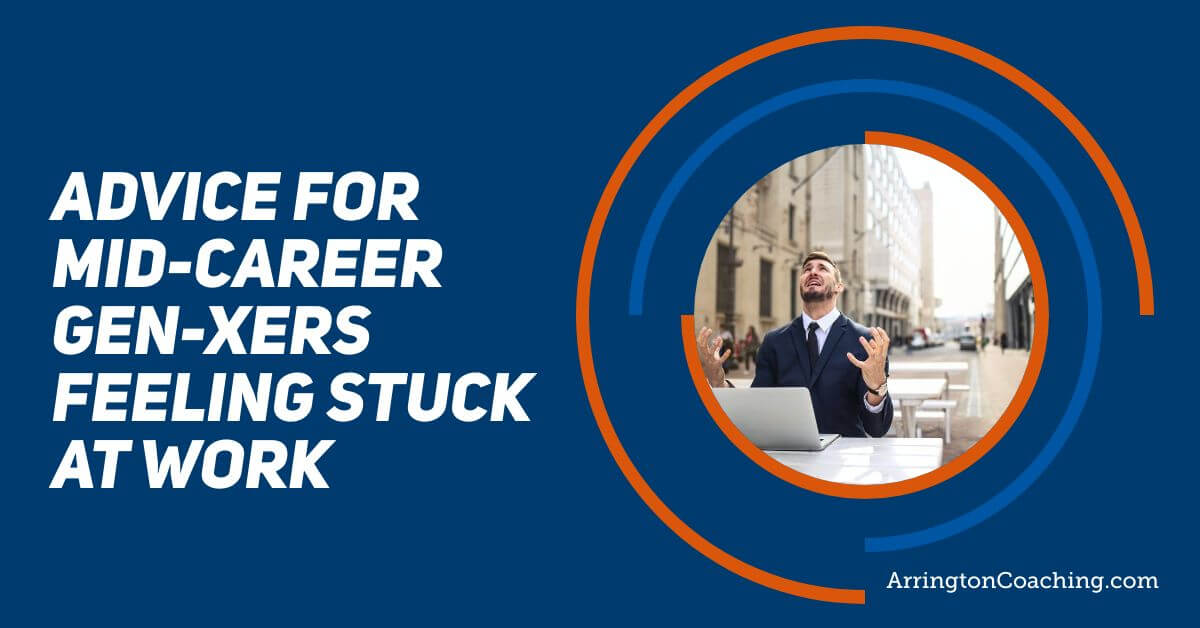 If you read the first article in this series, 25 Strategies for Getting Promoted (After You've Been Passed Over) bravo!

In this article I want to share some career advice with mid-career Gen Xers who feel they are stuck in their careers.

My wife and I were having lunch with another couple and my friend brought up his frustration and concern with being stuck in his career.

He felt like there were no opportunities for him to grow or advance and very little reason to even care anymore. His job situation was bleak, but that was the least of his problems. His perspective was hopeless and powerless.

He felt powerless to do anything but continue along the path of least resistance.

Gallup found that "the percentage of "engaged" workers in the U.S. -- those who are involved in, enthusiastic about and committed to their work and workplace -- is now 34%, tying its highest level since Gallup began reporting the national figure in 2000."

Only 34% of the workforce is engaged! And that's an improvement?

That means a lot of people are Livin for the Weekend. O'Jays reference, enjoy.

The struggle is real.

We established in the last article that Baby Boomers are staying in the workforce longer and Millennials are entering the workforce, which leaves mid-career Gen X'ers stuck in the middle.

You want to move up in your company, but you feel like there's nowhere to go.

Again, you aren't alone. The top 2 sources of workplace stress are low wages and lack of opportunity for growth and advancement respectively.

Feeling stuck can be debilitating. You feel as though you can't move, you can't change your situation, and your future is set and sealed.

I'm glad to say that those feelings only have as much power as you give them. That story is playing out only between your ears. It's just fear talking. You can take control of your career but you have to choose to.

You can choose to give up or get moving. This article is for you if you want to get moving.

When I hit 40 there was a new level of urgency to achieve goals and make an impact that I hadn't felt in my 30s.

Perhaps you've felt that too. Maybe it's the mortality check that happens when you close in on and then pass 40. You realize that you are approaching your half-way point and that's a scary thought.

Or like many 40-year-olds, perhaps you're not where you hoped you'd be by now personally or professionally.

Can you relate to this Michael Scott quote?

That encapsulates why you and so many other people feel stuck. You had and have goals, dreams, and expectations that you haven't realized and you feel you may never realize them. One of the reasons you can feel stuck in a job is because the job or company culture is out of harmony with your values and long-term goals.

Your values are usually subconscious and only become apparent when they are challenged.

This Psychology Today article says it best: "Your values form the foundation of your life. They dictate the choices you make and determine the direction that your life takes. Your values will influence your decisions related to your relationships, career, and other activities you engage in."

Certain courses and workshops I teach involve values assessment and often most participants haven't given their values, beyond the religious, much consideration.

It's easy to lose sight of your values or even to ignore when corporate culture shifts and conflicts with your values when you need your job to maintain your lifestyle. But this cognitive dissonance can lead to burnout, frustration and reduced job satisfaction.

Career goal setting is critical if you are going to move beyond feeling stuck to regaining control. Just going through the motions week-after-week, month-after-month, and year-after-year isn't going to help you to stand out. When you will put your career on autopilot you look up a decade later and wonder where the time went.

If you would like a proven process to create and achieve goals, check out Goal Sprint: 7 Days to Clear, Achievable Goals.

I would ask you to review your goals and make sure they are your goals and not vanity goals (i.e. goals you think make you sound cool) or someone else's goals for you.

What are your goals, and do you feel you can achieve enough of them in your current position or with your current company?

You, me, everyone has expectations of their job and employer. Most people expect they will be paid fairly, challenged, motivated, equipped, and appreciated.

Beyond that what do you expect. I would bet folding money that that missed expectation is at the root of your current feelings of burnout and malaise. Ask yourself what do you really want from this role, your job, your leaders, what do you want out of your career?

When any of these expectations go unmet for extended periods of time you can become disenchanted and feel stuck. Beyond a consistent paycheck, what are your expectations and are they being met?

A recent study found that "67 percent of U.S. employees say they feel they need more training and skills to stay up-to-date. In fact, over a third of U.S. employees report they have done nothing to upskill in the past 12 months..."

Training is one of the basic expectations we have of our employers. A 2017 APA study of job skills training and career development showed that only 45% of respondents have "time time during work hours set aside for career development."

Which means that career development is an after-hours, on your time affair. Or worse, you don't work on your career development at all. Getting caught in the vortex of daily emergencies, crushed under the deluge of "must-attend" meetings, and carried off in the rapids of never-ending emails can cause you to deprioritize training.

The short-term response can have long-term consequences. At the current pace of technological, industry, and marketplace change your skills could be outdated within 1-2 years.

You, rightly, expect to receive training from your employer. Training programs exist to make you competent in your job, effectively manage teams, and become a better leader. You are the primary stakeholder and decision-maker in your career success.

Company sponsored training just a piece of the puzzle. It's difficult for you to stand out when you are given the same training as everyone else.

How many times have you opted to miss a training because you had too much on your plate at the moment?

Training is moving online which helps with the time commitment but may still leave you completing it on your own time and getting the same ideas as everyone else.

With the workplace landscape changing so quickly, depending on corporate training alone might leave you unprepared for what's next.

Over the last few decades both retirement benefits (from pensions to 401(k)s) and healthcare benefits have shifted from being a primary employee benefit to being an employee responsibility.

Why shouldn't you take your training into your own hands as well, so that you can develop portable skills that will help you to stand out in any organization.

Training is a key area where you can differentiate yourself from your peers and give yourself a strategic advantage. You can read more about how you can invest in yourself here.

WHAT IS YOUR CAREER CURRICULUM?

What should you do to increase your skills and your value?

Read 2-3 books on your chosen subject.

Read current articles and blogs on your chosen subject.

Listen to podcasts on your chosen subject.

Find a conference to attend this year.

Check out our upcoming comprehensive career advancement program designed to help you stand out, change perceptions, and reclaim control of your career.

Consider enrolling in one of our other leadership or career courses here.

Considering the trends, your above-and-beyond professional development efforts can future-proof your career whereas doing nothing may limit it.

Everyone needs help and the wise seek it. -David Arrington

You may have bought into the myth of the self-made man or woman. But it's just that, a myth.

New year's resolutions have become synonymous with failure, why? The new year signals a fresh start and that enthusiasm without a plan and accountability usually ends with regret and rationalization.

Ours is a DIY society your DIY efforts can benefit from OPAE (other people's accountability and experience).

Here's some career advice: stop making it harder on yourself to succeed. Ask for help.

Every Luke Skywalker has a Yoda. Every high potential leader has a coach and/or mentor. Every CEO, superstar, or athlete has a team of coaches guiding them on any number of issues. Who do you have?

But "they did it by sheer force of will" you say?

The entire notion of willpower is under scrutiny. Some argue that it plays no part in your ability to achieve while others argue it's a limited resource.

What you know for sure is that you can undermine your best efforts by avoiding the difficult tasks in favor of easier tasks.

You, and almost everyone else, can self-sabotage and be your own worst enemy even when you cognitively know what you need to do.

Career plans can succumb to neglect if you don't engage some assistance. This assistance can be a mentor or a coach. If you are looking to clarify your career plans and position yourself for a promotion, let's schedule a time to talk.

If you don't like how things are, change it! You're not a tree. - Jim Rohn

If you don't like the road you're walking, start paving another one - Dolly Parton

As you consider your career and your goals is it time to pivot? Here's some criteria to consider when you are thinking about a pivot.

Perhaps there's an department or division you've always wanted to work in. Now's the time to ask how to make that happen.

Pivots aren't for the faint of heart but as I mentioned the 25 STRATEGIES FOR GETTING PROMOTED (AFTER YOU'VE BEEN PASSED OVER) there are times when you should consider moving to another company or making a career change.

You have more control over your career and life than you believe you do. Like my friend from lunch you are only out of control when you throw your hands up and relinquish it.

You may feel stuck right now but that feeling will pass when you begin to take the steps that are within your control. 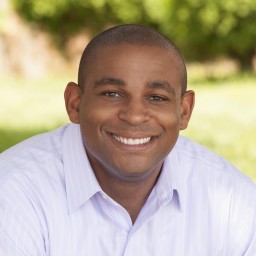